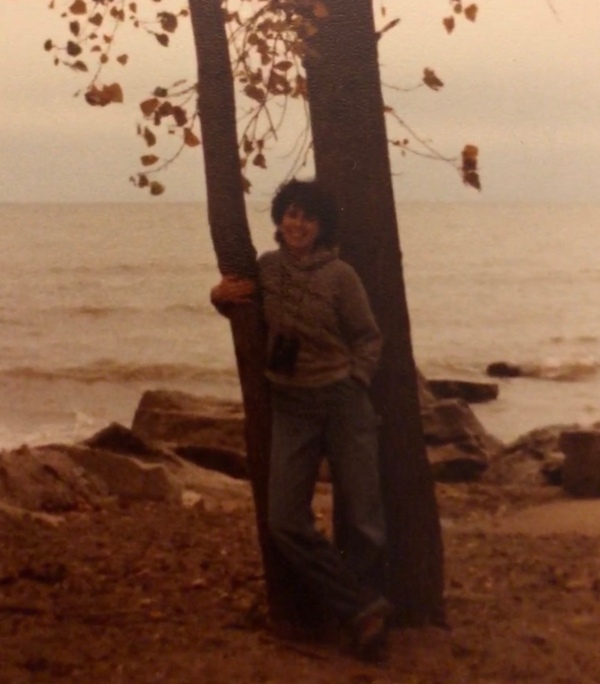 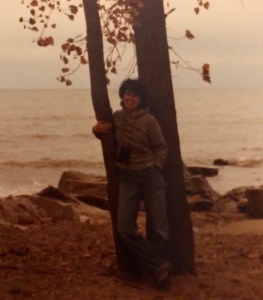 As my friends know from FB, I have become hopelessly addicted to the barred owl nest webcam.  The owls nested at the beginning of March in a box kindly provided for their use and outfitted with lighting and camera designed not to disturb them, but to permit the rest of us to watch.  Mama is the only one who can brood, so that’s her main activity, with the occasional flyabout tossed in for a distraction and some exercise.  Papa keeps her well supplied with rodents and crayfish.

A couple of nights ago she disappeared for an hour, much to my frantic concern.  The two owlets are due to make their appearance any day now; what if something had happened to her?  Such relief when she returned!

That blurry snapshot of me was taken in 1982!  Based on others in the same photo album, it’s  from a fall trip to watch hawks in Canada; I’m not sure whether it was taken in northwestern Ohio or on the southern tip of Ontario.  I had become starstruck by raptors, and then by all birds, a few years earlier, and in pre-children days had time to chase them all over the place.  The close friendships I formed a few years later when the kids were small did not include anyone with my passion for nature and the outdoors, so I did other things for a long time.  One of the things I most look forward to in retirement is getting back out in the field on a regular basis.

At the moment, “the field” is my laptop.  I can hardly wait for the emergence of the little owls!

It’s been a long time.

I’ve been studying up on migrating warblers and their friends — sparrows, shorebirds, waterfowl — for the last week or so.   I’m keeping a running chart, adding a photo of a bird, or two or three, each day, as I try to re-learn identifying features and colors.

I used to know a lot of birds.  I got into birds when I was in law school, and for years they provided a respite from an intense and competitive professional life.  I had many wonderful opportunities ~ teaching as a volunteer at The Museum of Natural History, hanging out with photographers and eagle researchers, participating in field trips in Ohio and Ontario.

We kept up with birds as a family for a few years when the kids were small, but then . . . soccer, and school, and life in general intervened.  For many years, I’ve gone out once or twice in the spring to look for the migrants, but I haven’t had the energy or interest to take them more seriously.

This year, I’m suddenly inspired.  And so I am making these charts, and remembering.  Some of the birds I could identify immediately; others are taking some work.  But what I’m finding to be really fun is re-discovering memories of the people with whom I’ve spent serious bird time.

I saw a post a couple of days ago from a birder in Central Park, who had a nice long list of sightings from earlier in the day.  My list from this past week is pretty short.  But I feel alive and connected to the natural world in a way that has eluded me for a long time.

There’s a great image of gannets here.  (Unfortunately, the only close-up photograph I have taken is of the one whose body washed up on the beach at St. Augustine last spring.  She — for so I decided that she was — made for a good opportunity for up-close study over the week we were there, but her soaring days were over.)

It was at St. Augustine that I discovered gannets.  Many, many years ago, sitting on the beach with my binoculars, I suddenly realized that the birds I was watching far out to sea were not pelicans.  I had been taking in their acrobatic dives, but saw that their coloring ~ their white torpedo bodies flanked by jet-black wingtips ~ was completely off.  With a little research, I discovered that northern gannets, birds of the ocean off Canada and Scotland, winter as far south as St. Augustine, and occasionally can be seen from the beaches, when storms drive them shoreward.

Some years I see them, some years I don’t.  Once, out in a motorboat preparatory to a parasailing adventure, I saw one resting on the waves.  “A gannet!” I was excited!  Our guide was surprised.  “I thought they were just gulls,” he said.

Gannets nest in huge colonies, thousands of large and loud birds in close quarters raising fluffy young to become pirates of the sea.  And they soar and dive ~ if you search for them on google and youtube, you will find astounding gannet feats recorded in photographs and films.  Elegant, exquisitely colored, fearless acrobats ~ who wouldn’t want to return someday as a gannet?

Back when people hid behind pseudonyms online, I chose “oceanmrc” ~ ocean + my initials ~ as my first, and Gannet Girl as my second.  Gannet Girl’s first blog was entitled Search the Sea.  Due to the vagaries of life, my blog writing has undergone many reincarnations of its own over the past fourteen years, but I am feeling the pull of that old title these days.

I had no idea that l’Île Bonaventure (click through the dots ~ lots of pictures), just off the coast of the Gaspésie Peninsula, was home to a major colony of nesting gannets, not until I began to research the adventure that Judi and I are planning.  I am going to a gannet colony.  When I say that I may never return, I mean it.

I think that Judi is a little concerned.  But I am excited for all that we are going to see on Gaspésie ~ whales, kittiwakes (those are birds, too), forests, waters ~ and to get to meet the people and learn something about their lives, out on the edge of the sea in the north.

But I am just a little bit obsessed with les fous de bassan.  My best bird friends.

My daughter and I went for a hike this afternoon, in a fairly new metropark ~ West Creek Reservation.  The trails are not yet well marked, and not visible in the snow, which has been packed down by boots wandering in many places beyond the official all-purpose paths.  Thus, despite the small size of the park, we got lost repeatedly.  We really have no idea where we went.

But it was a beautiful day, sunny and in the process of warming up considerably from the 20s of the past week.

As we neared the end of our hike, we saw a red-tailed hawk on the ground in the snow,  so still and immovable as we approached it that we thought it must be injured.  Suddenly! it took off and flew a short distance, weighed down by a squirrel which seemed much too heavy for it.  As things turned out, it was unable to fly more than a few wingbeats at a time, which it did, slowly making its way uphill and always keeping an eye on us.

We did not want to eat the squirrel, but we did enjoy watching the hawk!