A friend just published a post, on another topic entirely, in which she quotes a song from Judy Collins’s album, Who Knows Where the Time Goes?  My friend’s post is about a memory significant to Lent.  She dredged up some memories for me as well.

It’s the fall of my junior year in boarding school in western Massachusetts.  I am “campused” (like being grounded, boarding school style), due to an unfortunate encounter with a teacher who discovered a friend and me visiting the boys’ school five miles away in the middle of the night the previous spring.  Thus I spend a lot of time on my own, gliding around my dorm room or sprawled on  my bed, listening to music, when my friends are away – which means that 50 years later (FIFTY ?!?!) I will still know all those songs by heart.  At sixteen, I have loooong brown hair with red and gold highlights, a romance going very badly, and a stack of English papers to write, having largely given up on Algebra II.

I do not know that some thirty years later, I will have a son who will be a high school senior and living in the same dorm, with the same view of the mountains stretching before him.  I do not know that, like Judy Collins’ son, mine will die of suicide only a few years later, and that her music and those memories will all be wound into one ball of yarn, forever unraveling. 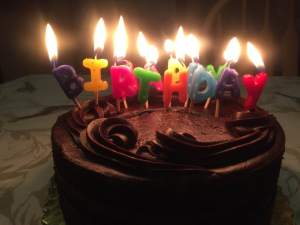 On the plus side: I had a great birthday!  My family arrived and, picnic gear assembled, we headed to our city’s outdoor ampitheatre for dinner on the lawn and an Apollo’s Fire concert of music by Vivaldi.  Apollo’s Fire plays baroque music using period instruments, and Vivaldi is often my favorite composer, so it was a wonderful evening for me.  The last time I heard The Four Seasons performed live,  we were in St. Chappelle in Paris on a simmering summer evening; Saturday evening was as delightful, and a good deal more pleasant insofar as temperatures were concerned.

On the downside, no sooner I had resolved, as I described in my last post, that the future would hold more time for family and friends than . . . it didn’t.  As I opened gifts on Saturday evening before our picnic, I learned that my daughter had spent the previous several days organizing a surprise birthday party for me for the night before!  A party that had been cancelled because I was conducting a funeral that evening. I was crushed when the surprise was inadvertently revealed by my son (who assumed that I must have known by then) ~ I had had NO idea and have always wished that someone would plan a surprise party for me!  Well, as a friend pointed out, I did get my wish  . . .  someone did plan a party.

A few nights later, I missed my book club, a bi-monthly gathering of women friends, because I was en route home from an out-of-state training event.  I am so often flummoxed in my efforts to spend more time on my own relationships, and so disappointed when that happens; I am beginning to see retirement as a necessity more for creating time with those I love than for anything else! 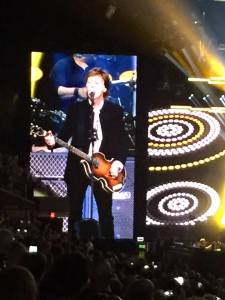 The Beatles were the music of our lives . . .  Hundreds of memory episodes from my life, late elementary school through high school, come complete with Beatles music.  And so do many memories of my life with my kids, who learned the same songs as children, and gave me Beatles CDs as gifts.

First memory: A girl from our class ~ we must have been in 5th or 6th grade ~ came running out to the playground during recess to tell us that the Beatles had made a song about prostitution.  Little Greek chorus that we were, we all cried breathlessly, “What is prostitution?”  I don’t recall the answer, but I’m sure that our classmate didn’t know the answer any more than the rest of us did. (The song was “Can’t Buy Me Love.”)

In sixth grade, four of us lip-synched our way through “Eight Days a Week” for a PTA variety show.  I was, of course, John ~ the intellectual one.  Not that I knew that word, either.  But he wrote poetry and made funny drawings, and that was good enough for me.

In seventh grade, I went off to a convent boarding school.  On our very first night, we had some sort of event which conflicted with a Beatles appearance on the Ed Sullivan Show.  Paul McCartney would be singing “Yesterday.”  I was heartbroken.  Later I learned that some of the eighth grade girls had skipped the event — a meeting? chapel? — and slipped down to the lounge to watch.  Clearly I had some work to do in terms of learning how to manage boarding school life.  (I learned quickly.)  On FB, I dedicated last night’s rendition of “Yesterday” to one of those eighth grade girls.

Yes, last night my daughter and I went to Paul MacCartney’s second concert here in Cleveland.  It took me 50 years, but I got to hear Paul in person.

My daughter asked which was my favorite Beatles album.  That would have to be Rubber Soul, associated with evenings in the dorm in Catholic School.

In 11th grade ((different boarding school), a group of us found ourselves “campused” (that’s like being grounded) during our long fall week-end, due to some middle-of-the-night exploits on the boys’ campus the preceding semester.  We took a turntable and the White Album down to the pool and swam all afternoon to the sound of the Beatles.

That same year, Abbey Road was released.  That one’s associations include long late nights in one of the seniors’ room, talking over and around those very strange songs.

In  the spring of 1970, both Let It Be, the Beatles’ final album, and McCartney, Paul’s first solo album, were released.  I worked on Cape Cod that summer, and came down with mono on my birthday at the end of July.  Those songs are all burned into my mind as a result of long August afternoons spent doing nothing beyond listening, draping myself over living room furniture and pondering my tragically dashed end-of-season plans.

That concert last night?  Fantastic.  Leaving aside the obvious ~ the 74-year-old Paul McCartney delivering nearly three hours of nonstop rock ‘n roll, from the hard-driving “Hard Day’s Night” to love songs like “Here, There, and Everywhere,” with a hefty dose of Wings music, new music, and Beatles anecdotes ~ it was a night filled with energy, memories, and 18,000 people singing along to “Hey, Jude.”

I wish that I could have seen all the Beatles in concert.  But the 50-year wait for Paul was worth it!