Judi was actually up until about 5:00 am working.  When I arose a couple of hours later, she was sound asleep ~ in our Murphy bed!  She said that she’d always wanted to sleep in one so . .  dream come true.

I headed out for a beautiful morning beach walk.  The St. Lawrence River has widened to the point where the northern shore is invisible.  Birds: black-backed gulls, cormorants, and gannets in the distance.  Crab breakfast for gulls.  The pink flowers we would see everywhere.  I made a cairn for Josh.

I felt fine until we began loading the car and I reached upward to put now-dry tents back into the roof storage container.  My first hint that I might have done some serious damage with that fall the previous morning.

Lots of driving that day as we proceeded from Matane to Gaspe’.  A delicious lunch at a roadside cafe’, where the chef/niece of owner sent me off with a bag of ice for my invisibly bruised ribs. 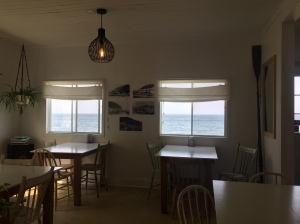 I had not realized that the eclipse would be partially visible in the peninsula.  When the time came, it seemed a bit hazy, and the river darkened from blue to gray.  Most obvious sign?  The gannets vanished, and the gulls and cormorants moved in toward and to the beach.  Twenty minutes later, they were all airborne again!

As we drove on, the landscape began to change, and so did our conversation.   Sixty-four years have brought challenges we could not have imagined in our dorms all those years ago.  I think we’ve handled them pretty well.

We reached the town of Gaspe’ in the early evening, settled into our hotel  ~ home for the next three nights ~ and went out to a restaurant we enjoyed so much that we would return the next evening. 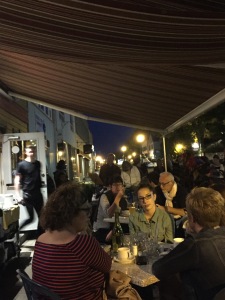 By bedtime, I was hurting, but highly motivated for the next day’s gannet trip and promise of sunshine.  I turned down all suggestions of waiting a day, and went to sleep on my back ~ not a good sign!