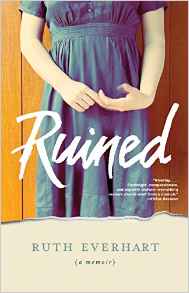 Ruth Everhart, a Presbyterian pastor for the past 25 years, has written a brave and important book, skillfully addressing a topic often spoken of only in hushed tones and behind closed doors.  On an ordinary Sunday evening transformed into a night of terror, she and her college housemates were brutally attacked and raped by two armed intruders, an event she describes in terrifying and compelling detail in the opening chapters of her memoir.

The consequences of the attack were no less brutal, in emotional and mental terms.  The police and prosecutors did their job, resulting in a lengthy sentence for at least one of the men, but the criminal justice process is a lengthy one, filled with postponements and compromises. The college and others charged with the care of the women responded with astonishing incompetence. Family and friends had no idea what to do or say.

It is in writing about the spiritual consequences of her rape, however, that Ruth’s writing particularly shines.  Ruth was a deeply religious young woman, raised and attending college in a Christian tradition in which concepts such as predestination, God’s will, God’s foreknowledge, God’s plan, God’s sovereignty, and God’s ordination of specific and limited roles for women were hammered relentlessly home.  She was bewildered, angered, and devastated, not only by the rape itself — by the invasion of her body and by the violence and the humiliation forced upon her —but by what those things might mean in the context of the religious tradition she held dear.  Could a rape at gunpoint have been God’s will for her life? Her questions, and her attempts to make sense of what happened and to forge a new spiritual path, will no doubt be meaningful to the many people of faith who have been taught not to question God’s ways.  She emerges as a powerful role model in the Biblical tradition of seeking answers from God when the events of life threaten to engulf us in confusion, sorrow, fear, and rage.

A disturbing element of the book which I hope that Ruth addresses someday has to do with its racial overtones.  Ruth and her housemates are all white; the perpetrators of the crimes against them are African Americans.  I can imagine – and I cannot at all claim knowledge here, but I can imagine – African American women heartbroken as they read the many physical descriptions of the men – both because it is black men who are responsible for such vile acts of depravity, and because of the reminder of how others look at their sons, men with the same physical attributes.  Ruth herself, dealing with after-effects which today might well be diagnosed as post-traumatic stress symptoms, is surprised and shocked by some of her own reactions. (I should add that, having once practiced law in the area of domestic violence, and as the mother of a son who is a criminal defense attorney, I have been party to many discussions about violent crime, and about race and the justice system – and that that topic is not the focus of this book.  But it lurks between the pages.)

I hope that Ruined is much read and discussed, in general and in particular in our churches. In a world and in an institution in which women are often marginalized; in which our concerns are often dismissed and our bodies are frequently the objects of commentary, derision, and unwanted attention; and in which the word “rape” is quickly silenced — this book needs to be a subject of conversation.  We all have much to learn from Ruth Everhart about how to care for those in our midst for whom rape has become a reality.

And I hope that Ruth writes a sequel. I am longing to read the story of her journey into a tradition in which she was welcomed into ordained ministry, and grew into the voice which makes this book possible.

Thank you, Ruth, for the care and courage with which you have begun the conversation.